Coming soon.  Though this wasn’t a particularly complicated image, it was made so and my plans were changed by a hardware failure and my insistence on moving forward.

First, I will say that this image has  revealed a few issues and created a few frustrations. I will list them right off the top to get them over with.

There!  I feel better now!

Now, onto the process.

This effort began with two pictures only because of the conflict with Aedan’s hat and hair.  I could have just drawn the hair in I suppose (and did later) but to start I wanted a ‘clean’ image with his hair in place and not pouring through the hat. So, after lots of tweaking to get the sun as I thought I wanted it and moving around to get a decent composition, I took the first image.

Hair was removed and the second image was grabbed. Close inspection will reveal that the bird and trees have moved between images so though they are otherwise identical, a choice had to be made about which to use.

Two layer maps were used in GIMP to introduce the gausian blur to items above the wall and gradually, behind the grass at the edge of the sand.

There were many hand-made edits to achieve the final image. The palm tree behind Aedan isn’t blurred as much as the other things that are further away so where they met had to be smoothed over.  Foot prints were needed in the sand so that he didn’t appear to have just dropped in from the sky…and sand added around his left foot that is bearing weight.

Shadows were added where I felt windlight had failed….under the brim of the hat, on his cheeks behind the glasses, along the left side of his torso behind the shirt and on his legs below the shorts (which in hindsight may have been a bit much but I was eager to add shadows 😀 )

Finally, concerning Aedan, I manually added hair to his beard and head since I’ve not been able to find what I’m looking for in SL. At this distance it’s unnoticeable unless you’re looking specifically for it. Future images will be closer so hopefully I will have perfected the technique by then!

The final touch was to add a flare and some dirt on the lens but the photographer took the shot with the sun in the wrong place so….he moved until there was solar reflection in the top floor window of the building across the street 😉

I will probably say this again and again but I am feeling more comfortable with Gimp with each of these ‘exercises’ that I do. Using layer masks was initially somewhat daunting but now that is becoming second nature and greatly simplifying the task at hand by minimizing the ‘glow’ that I was struggling with image. That ‘glow’ was a side effect of using a mask to cut out pieces and replacing them with bits that were cut from another image. That was not the case this time.

The first photo is the base that everything else was added to. Christi plays both the customer and the waitress but there is only one of her…

The second image is identical to the first except Christi is now playing the customer.

While examining photo 2 to determine where the customer would be snatched and added to the first photo I noticed that her long mesh skirt didn’t behave so nicely when she was sitting. I considered how to best address then and settled on taking another photo that was identical except she is wearing the short version of the skirt to which I copied bits from the previous photo and applied them where they should have actually been then manually touched up some areas to make it all fit.

To create a more realistic scene outside the diner where the light would be much brighter, everything inside the diner was de-rendered and windlight was tweaked to brighten it up.

After applying a gausing blur to the previous image, a layer mask was used to replace the areas that were being viewed through the windows. Another layer mask was used to create shadows were they were missing.  It is when I went to fix the shadows under the table that I realized the windlight settings I used washed out the marble texture in the floor so it took a bit of work to repair that.

As simple as the story line around this photo was, creating the image was no small deal for me.  I would guess that I easily spent 12 hours preparing for and creating this image. While processing I completely started over once, corrected an issue I saw as much as possible and repeated the steps I knew well by then.

Anypose and Lumipro were both used though in the end, the only thing Lumipro was used for was to animate both avatars through the Lumipro sitball. Anypose is proving to be a godsend because in most cases I would never find an pre-made pose that would fill my need and I would have come to this conclusion after many hours of shopping.  Additionally, I have the option of adding any that might have a wider appeal to my marketplace.  (which I do anticipate doing)

In the beginning.  For “El Sombrero” I required a store to sell the subject hat. I could find nothing suitable in Havana and even traveled to several similarly themed sims but found nothing.  So, I started building a store. It didn’t take long to figure out that I don’t have the building skills to build anything  as realistic as I am demanding. I do now have some not-bad Havana style prim columns…that will probably never be used 😀

With that settled, I returned to Havana and found this building that I felt I could make in to my store if I could rez. Joining the Havana group in world for L250 gave me rez rights. With so many ideas for pics on this vacation, I could have made the previous images easier had I joined the group earlier.

The initial image was photographed with my video settings set to Ultra and the windlight setting as indicated – Nam’s Beach Scene is the initial preset. The only adjustments made was in the time of day and angle.  I was looking for something shortly after noon so the sun is nearly straight overhead.

Havana is a very colorful build.  In most of my pics so far, I’ve felt it necessary to tone down the colors. This would be no different.  Additionally, to make the image more realistic, I needed different lights inside and something to fill the bare walls.  It because quickly obvious that I would need four layers to work with

Using the trick I learned from Natsumi, I rezzed a prim inside the building, pulled it up close to the windows to block out Christi and the display that was already in place. I realized at the time that by pulling it so close to the wall, I lost the windows in the doors.

This wasn’t the only thing wrong with this mask – I failed to notice that the prim wasn’t tall enough to reach to the top of the windows. Though I went back in world for a second chance I wasn’t able to get the camera, viewing angle and Aedan all positioned in the exact same spots again. In the end, I had to piece together several pieces to create a functional mask.

And so the journey continued…level adjustments, saturation tweaking, fixing missing shadows and wardrobe issues.  When the inside walls were darkened several issues came to light around the masking. Basically, I had to start over and redo some things to get back to the same point.

When I ‘thought’ I was finally done, it became apparent that all of the masking made the glass in the windows hardly visible….and on such a bright day, wouldn’t there be reflections?  I had an idea in my mind about what would be in the reflections but once I got back in world and moved inside the building, it became obvious that Aedan’s reflection would not be in the window beside him.  In hind sight, it probably wouldn’t be where it ended up at either because the column between him and the door would keep that from happening.

In the end…I’m basically happy with this image. The windows are too clean – that is bugging me a bit but not enough to change the image since it has been posted to flickr.

Like everyone of these, I feel I’ve learned a lot that will make future edits move more smoothly.  Above all else though, this was fun.  Can’t ask for much more than that.  Now, on with the next adventure!

Behind the scenes comments coming.  Tools used for this image include Lumipro, anypose, windlight and Gimp

This image was a compilation of the three images below.

For the record, I’m finding it difficult to stick to my pledge to do this series of images in B/W. I am certain that the daylight photos will be much easier but these requiring night time are challenging to determine the correct level so that they aren’t washed out or just too dark on other’s monitors.  I believe the uploads to youtube – using the same final image – have all been too dark also.  I may have to form a committee and do a study to determine the correct exposure..or just avoid night time b/w photos 🙂

The windows of the airport terminal were a bit tedious for me so I derezzed them then put up a huge white prim (set to bright) with the CAIWL windlight selected for this image of the more mature Aedan waiting patiently. 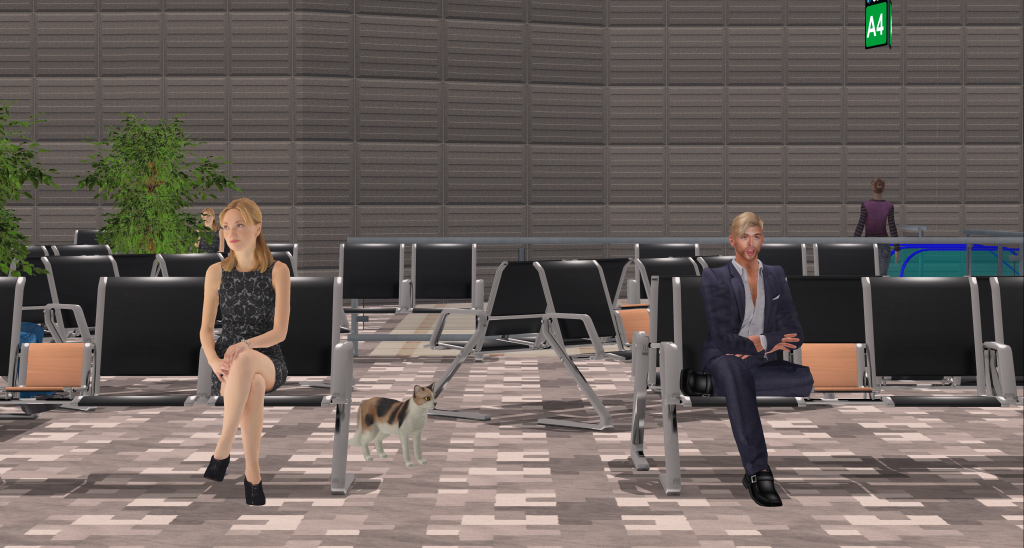 Next, younger Aedan took the seat and the camera was carried to the window. This image was horizontally flipped, skewed a bit  and..unfortunately I had to hide most of it to keep the reflection from being too busy…including the cat 🙁  (yes, that was the only pose in the seat… ) 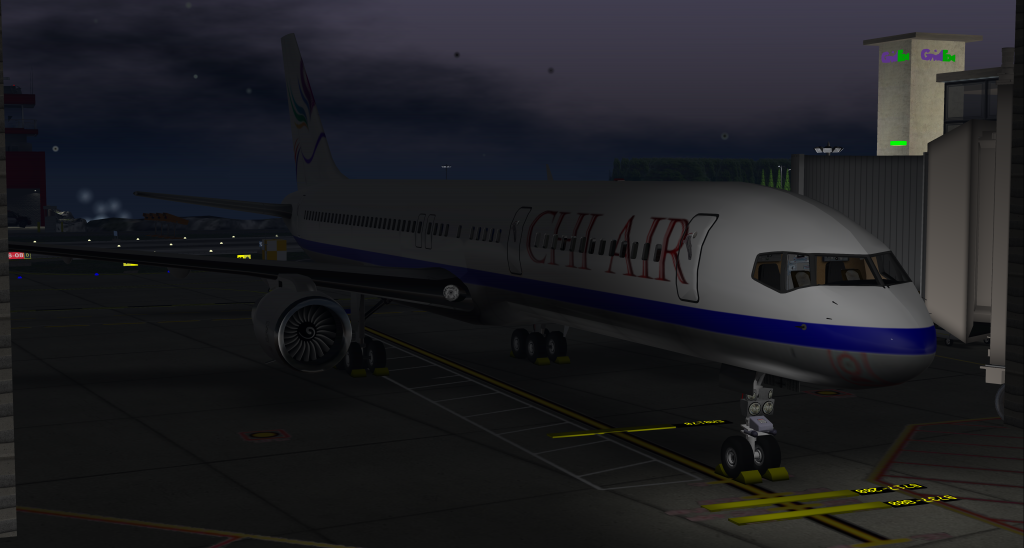 Windlight was set to Cafe Lighting and the sun adjusted to get some darkness – which proved to be too dark so the exposure was later reduced. 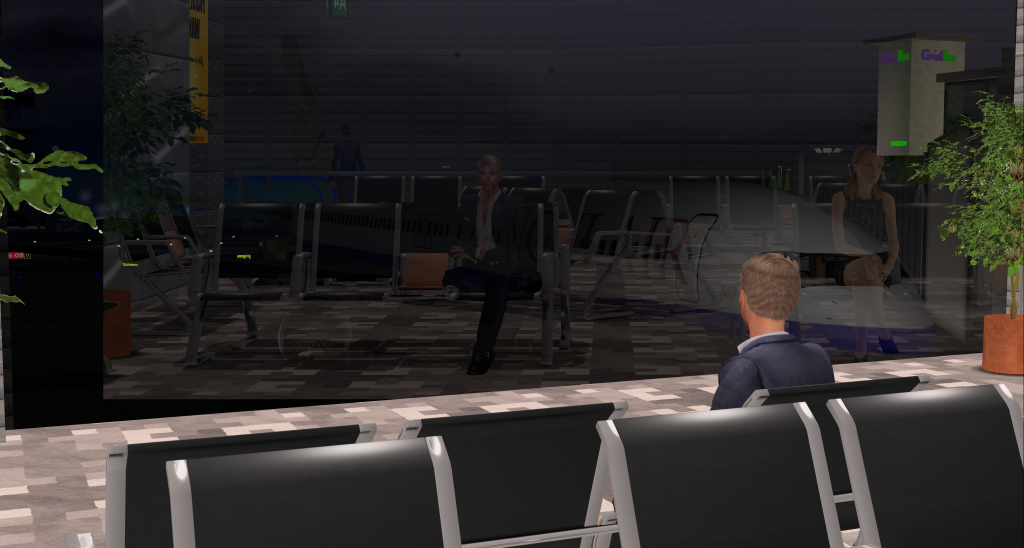 The compiled image – before removing some of the reflection and increasing the exposure of the outside image….and removing the color.

Return to the article

The compiled image - before removing some of the reflection and increasing the exposure of the outside image....and removing the color.
Previous
Next